Today, Dockx Rental is the guiding light of vehicle rental. But it started life as a small company on the Boomsesteenweg in Wilrijk. Jozef Dockx, founder and current chairperson of the Dockx Group, explains what the early days looked like and how the next generation (his children Sarah and Joeri Dockx) are now steering the family business in the right direction. 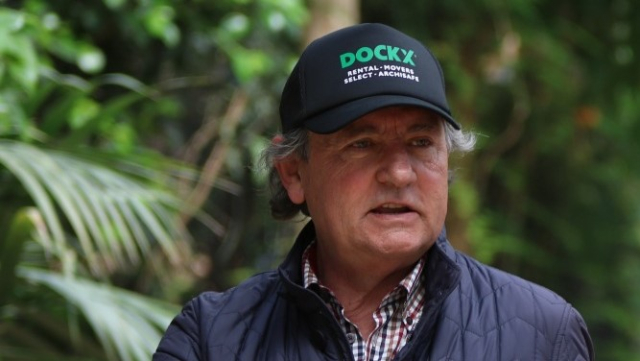 What kind of family did you grow up in?

I’m the oldest of five children and I grew up in a warm and hard-working family. My father was self-employed, first in fruit and vegetables, and then as a truck driver. From the age of 14, I knew I would be an entrepreneur too. I worked a student job for 20 francs an hour back then, which is the equivalent of 50 eurocents. But I realised I could never work for a boss after just two weeks. I have an innate aversion to subordination.

During my student days, I traded all sorts: from textiles, lawnmowers and stoves to antiques and old-timers. My only goal was to do business and earn money. When I left school, it wasn’t easy to start my own business as a self-employed student with no financial background. I tried everything during that time; I was a self-employed truck driver for six years, I kept two dance halls open, and I tried to become a pop star. But society wasn’t ready for our music yet (laughs).

How did Dockx Rental come about?

In 1979, when I was 26 years old, I took over seven second-hand delivery vans and trucks from my father. Taking into account what I already knew, I looked for the most efficient way to get the best return, and decided it was better to get the vehicles on the road without personnel. The first building blocks were laid with capital of 160,000 francs (€4,000) and the love of my life at that time, Sarah and Joeri’s mother, who wanted (had) to co-sign at the bank with me. The rest is history. God created the world and I created Dockx (laughs).

What did Dockx Rental look like in the early years?

We had a very small setup on the Boomsesteenweg in Wilrijk, 100 metres from the current head office. I slept between oil drums in the garage with a phone under my bed for two years. I felt very proud being able respond to customers waking me at five in the morning, for example when a market vendor’s van wouldn’t start in the winter. I was their only option at that time.

I remember very well painting all the writing and advertising on our vans every weekend under the Wilrijk bridge when we first started. I also painted the signage on the front of our building. We still did a lot of manual work in those days, but a lot has changed since 1980.

Not everyone agreed with my choices and decisions, by the way. I had to fight differing opinions and the world around me. But I kept going. The only thing I regret is that I chose the family name as the company name. This suggests the whole family, even those who have nothing to do with it. I didn’t take that into account, but I also didn’t expect the company to grow so big. The concept was a hit from day one and we enjoyed a lot of success.

How did your kids get into the business?

I initially made it clear that my children would not be entering the company. I didn’t want to become the typical entrepreneurial family where business is the only thing discussed at the dinner table and family gatherings. I wanted a family bond. I also saw other children giving up their family business because they’d been pushed into the successor role. You don’t know if they’re really competent. But there came a time when I spotted that my children had the required entrepreneurial spirit; apparently they were born with it. And they make a great team. You can only be envious.

I finally asked my kids when they were well into their twenties. I couldn’t finish my sentence before they said yes; only Joeri wanted to backpack from Antwerp to Compostela first. This was straight after college and it gave him some time to think about what he wanted to do with his life. When he came back, he started working at Dockx.

How did that collaboration go?

From day one, I told them that they would get a chance but nothing was guaranteed. We would make a decision five years later. My kids had to start on the shop floor. I remember Joeri having to drive a truck through Brussels. And they‘ve both had to work at all levels: from moving houses and working in the garage to administrative tasks and even licking stamps. Then I realised that they are superstars; we never had so much revenue before the kids came on board.

Working with your children is complex, however. You constantly have to make the distinction between being their father and their manager. You have to let go. It’s a combination of the older generation’s experience and younger generation’s energy and brashness. Conflicts exist and are human, but what we share is always stronger than what divides us. I wouldn’t call myself conservative, but for forty years I’ve had to deal with a lot of things, and you want to protect the younger generation from that. At the same time, I’m constantly looking for change, which young people naturally excel at. That’s why I like to surround myself with them. Their enthusiasm, drive and search for career and innovation fascinate me enormously.

What advice have you given your children?

Nil volentibus arduum – nothing is too difficult for those who want it.

Keep your feet on the ground and never take anything for granted. If all is going well, there is probably a problem lurking around the corner. Everything is changing and there is much that is beyond your control. You have to work seven days a week, and never forget that the employees you work with are people too. Everything depends on them. You can easily turn a hundred euros into a million euros with the right people. But you can just as easily turn a million euros into a hundred euros with the wrong people. Always keep an eye on what’s happening on the work floor, because if things go wrong there it’s usually because there’s something wrong at the top. I‘ve come across a lot of intelligent people in all kinds of roles throughout my career, especially in the lower levels where you often find very smart people who simply didn’t get the right opportunities. You must never forget that.

Success is a never-ending road; it requires constant work. Success is also not certain. We barely survived the coronavirus pandemic. These are things you can’t plan for, so you never know what the future will bring. I’m very proud of what we’ve already achieved. And what we have today is not just down to me. It’s an achievement by all the people who have been on board for years. I’d like to extend them my special thanks.

Joyce DiDonato, an Egyptian mezzo-soprano, once said: “There is no ‘it’.” I made ‘it’! This is ‘it’! It’s all an illusion. The journey is the destination. The search never ends, and that’s okay.